A playful interactive multi-media installation in which early cinema techniques and digital dance are layered and animated. Starting with a library of analogue and digital source material, media artists Margie Medlin, Rhian Hinkley, Olaf Meyer, and James Wilkinson devised a series of experiments that combine motion graphics with digital dance choreography by Vicki Van Hout and Patrick Lucky Lartey. The project fosters collaboration between media artists and their experimentation with responsive technologies. The project invites audiences to bring a sense of curiosity and explore their own movement in relation to this dynamic installation. Presented in Dance Massive 2019. In situ at the Altona Gate Shopping Centre, the Digital Art Media Lab, by The SUBSTATION. Public Exhibition March 14 -17, 2019

Artists Margie Medlin and Nikki Heywood look at some of the experiments from Margie’s Cinematic Experiments project (2017-2019) and discuss the concepts and ideas behind them.

THE PROJECTIONIST (A durational installation)

The Projectionist was a live event. Ten sixteen millimeter projectors fill the disused Tanjong Pagar Railway Station Singapore with my dance film loop archive. The event pays homage to the art of cinema and experimentation between movement, time, light and space. Space becomes a kinetic sculptor the audience moves inside it like the ghost in the machine threading together a dance film archive.

The highlight of Dance Marathon – OPEN WITH A PUNK SPIRIT! is undoubtedly the Archive Box. Each of the seven Japanese dance-makers (the Archivists) have archived one seminal dance of theirs in a Box of influences and inspirations. These Boxes were recently introduced to another seven dance-makers (the Users), who have never met the Japanese artists before. The Users are each invited to create a response to a specific Archive Box. Together with dance dramaturgs Nanako Nakajima, Muto Daisuke, Margie Medlin and Festival Director Ong Keng Sen, all 14 dance-makers have embarked on this blind date of sorts. In the spirit of copyleft and creative commons, the Users’ responses and the Archive Boxes will be unveiled on two exciting evenings, 29 August and 5 September 2015.

2004 – 2007 THE QUARTET PROJECT More info
Informed by developments in the fields of physiology, computer science, real-time software development and engineering, this multi-media event was the culmination of several years’ collaborative research. It investigated the kinesthetics of music: determining movements that produce sounds that in turn produce new choreographies. Quartet aimed to present a versatile and flexible creative process for experimenting with cause and effect in multiple media; an insight into what it means to transform one medium or gesture into a completely different one; a redefinition of interaction through music and dance.

Quartet was funded by a Sciart Production Award (2005-2006) from the Wellcome Trust, in collaboration with the Physiological Laboratory, University of Cambridge. It was co-produced with the Performance and Digital Media Department of the Institute of Contemporary Art, London (ICA).
Other funding partners include the Arts Council of England, the Arts Victoria Cultural Exchange Programme, the New Media Art Board, International Community Partnerships and Market Development of the Australia Council for the Arts.

Quartet was partly funded by a Sciart Production Award (2005-2006) from the Wellcome Trust, in collaboration with the Physiological Laboratory, University of Cambridge.
Quartet is co-produced with the Performance and Digital Media Department of the Institute of Contemporary Art, London (ICA).

Other funding partners include the Arts Council of England, the Arts Victoria Cultural Exchange Program, the New Media Art Board, International Community Partnerships and Market Development of the Australia Council for the Arts. 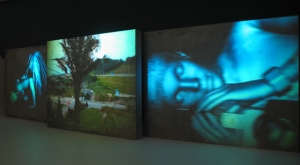 2002 MISS WORLD
Featuring a duet between a live dancer and a virtual dancer this project explores the complex relationship between the real and the virtual. The choreography investigates the interplay between the camera and the dance, by creating choreographies and uses the combined capacity of dance and film to convey the qualities and feeling of the movement to the viewer.
EXHIBITIONS: 2007 Spring Dance Festival, Sydney, Australia. 2003 Future Cinema, Kiasma Museum of Contemporary Art in Helsinki. 2003 Media Festival Bangalore, India. 2003 Screenings in Cuba, Chile and Costa Rica 2002 Future Cinema ZKM, Center for Art and Media, Karlsruhe, Germany. 2002 Tanzmediale, Cologne, Germany.

Review: The art of dance, Ballet Tanz
“Miss World” is the title of an installation by Australian-based artist Margie Medin, created in 2002 in collaboration with the Karlsruhe centre for art and media technology and last shown at the tanzmedial exhibition in Cologne. A monumental triptych made out of three concrete walls, the work draws from the spectator involuntary comparisons between the images projected on to it: on the right-hand wall, a dancing female cyber figure and on the left, slightly unsynchronised film of a real woman dancing the same way (choreographed and danced by Rebecca Hilton). In the centre, we see images of spoiled landscapes and ugly urban development which would quickly lose their fascination if one did not realise that these images are moving in the same way as the women – the camera is dancing. In Medin’s work, which the spectator is intended to perceive through identification and empathy, just like stage dance, camera and dancer blend into one; the camera becomes an appendage of the body. Medin is drawn to dance because of its “intellectual and emotional information without a text basis”. While “Miss World” addresses numerous issues, from the cult of physical perfection to the role of technology in society and the brutal urbanisation of the natural environment, it is primarily a highly intelligent reflection on dance through the media of new technology. 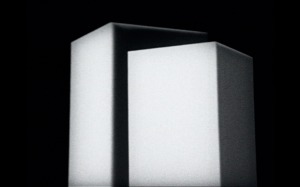 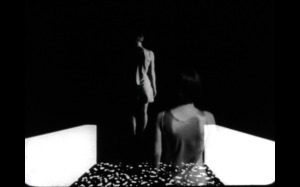 1996 MOBILITY IN AN ARTIFICIAL CITY
The locations within this city are The Transit Zone, The Market Place, The Deportation Centre, The Border Town and The House. The city plan and each location are based on plans from other sources. The work, Mobility in an Artificial City, draws attention to the emotional interactions of inhabitants to different spaces.
EXHIBITIONS: 1998 Troisièmes Reconcontres Internationales Art cinéma/ vidéo/ Coordinateur, Paris. 1997 Body Works Festival, Dance House, Melbourne. Asian Dance Festival, NYC, USA. 1997 Tollwood Festival, Munich. 1997 Art Space, Sydney. 1996 Green Mill Festival, Melbourne Town Hall.

1991 “TRANSITIONS” BEYOND EL ROCCO
Designed a slide wall backdrop for a documentary filmed in Sydney
A film about contemporary jazz music. Produced by Lucas Produkzions.

1988 “LOOP”
An exhibition of film loops, Part of the Sydney Film and Video Event

1986 “JETTISON THE OBJECT RELEASE THE IMAGE”
A multi-projection performance, The Performance Space, Sydney.